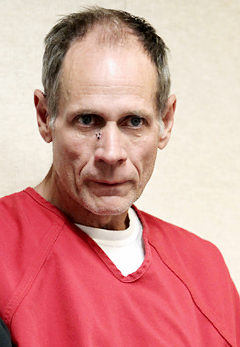 The face of evil mocked the American, (in this particular case the Californian) Just-a-System once more, giving us some indication as to why our governing officials are failing in one of their constitutional responsibilities to …”insure domestic tranquility.” Missing every possible clue,… calls from suspicious neighbors, opportunities to search his home, the fact that he’s already a registered offender, right up to the “Blue’s Clues” stamp in the middle of his mug! How much longer can the republic stand with the tolerance of this level of criminal imposed upon the citizens?

I have nothing to add to Ezekiel’s pressient commentary. Is there any punishment fit for this type of crime short of a painful, public death penalty? If so, I’d like to hear the rationale. Can anyone in thier right mind continue to advocate tolerance of such deviant criminals in our society? At what point will the American people re-assert our God-given common sense and demand that abducters and killers be put to death for the common good of us all, (and with a view toward the destiny of every human soul, even the criminal’s).

And there’s lots of other stuff, just listen…